THE PARTY BADGE OF THE NSDAP

The standard NSDAP party badge was a symbol of affiliation to the party, and only official members were allowed to wear it, although this was not mandatory (after Hitler's accession to power in January 1933, it was illegal to wear the badge without being a member of the NSDAP). It was recommended to wear the badge on the tie with a uniform, and on the left lapel with civilian clothes. Most often, it had to be purchased by the member himself, although some badges could be given in certain occasions, especially to HJHitler Jugend and BDMBund Deutscher Mädel when they reached 18 years old.

The design of the party badge seems to be as old as the early 1920s, following an idea from Anton Drexler to create a distinctive item for members. However it is still unclear who actually designed it: Adolf Hitler could have designed the badge himself, but some clues are also pointing towards Josef Fuess, a goldsmith from Munich whose company produced a lot of NSDAP items.

Hitler seems to have been wearing a standard party badge on uniforms and civil clothes in the 1920s, and then replaced it with the NSDAP Amtswalterabzeichen (Eagle of Sovereignty stick pin) around 1930, wore on the tie or left vest lapel until 1st September 1939 (the last photos of him wearing the Amtswalterabzeichen are taken during his speech prior to Germany's attack on Poland).

THE GOLDEN PARTY BADGE OF THE NSDAP 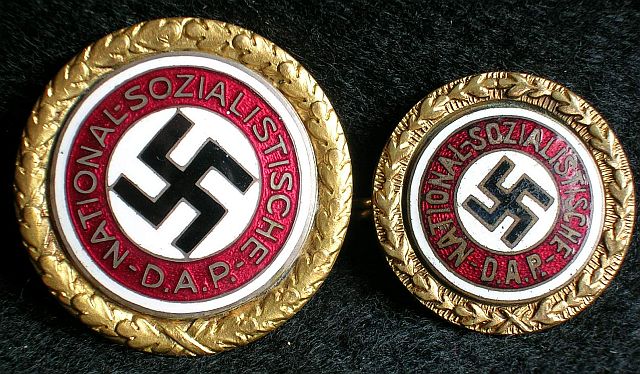 The Golden Party Badge (Goldenes Ehrenzeichen der NSDAP) was introduced by a Hitler's decree of 13 October 1933 as a reward for NSDAP members whose party membership number ranked (as of 9 November 1933) from 1 to 100,000 and who had been active and never left the party. On 9 November 1933, the badge was actually rewarded to 20,487 men and 1,795 women among the 100,000 members that were eligible, who received their reward, engraved on the back with the badge number (and its corresponding paper certificate) during the commemoration of the 10th anniversary of the Beer Hall Putsch.

At the discretion of Hitler, other Golden Party Badges were awarded after this date, and at various periods to certain deserving members of the NSDAP. Some special badges were awarded during the ceremonies held on 30 January of each year for the celebration of the Machtergreifung (Hitler's accession to power) for those who had shown outstanding service for the NSDAP or the Country. These ones were engraved on the back with the "A.H." initials and the date (ie: 30.1.39)

The Golden Party Badge came in two sizes: 30 mm diameter for wear on service uniforms and 24 mm diameter for wear on a civil jacket. Only 2 makers (from Munich) were allowed to produce the badge: The Joseph Fuess company, which only produced the 24 mm version, and the Deschler & Son company, which produced both versions (note: from 1941 onward, the Deschler company was the sole producer of Golden Party badges). 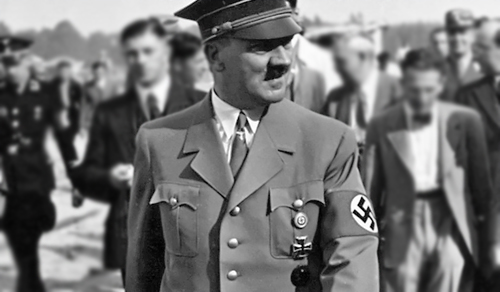 Hitler's Golden Party Badge was engraved on the back with the number "1". He owned several copies of it, which he kept in various places and on various uniforms. He wore it for the first time on 9 November 1933, the day the badge was introduced after the October decree. Strangely, photo records show that he stopped wearing it from that day until early 1937 (the earlier photo of Hitler wearing it again is dated 10 February 1937).

According to Joseph Goebbel's last letter to his son from 28 April 1945, Hitler gave his own golden party badge to Magda Goebbels during their last hours in Berlin's Führerbunker, prior to their suicide and the collapse of the Third Reich. 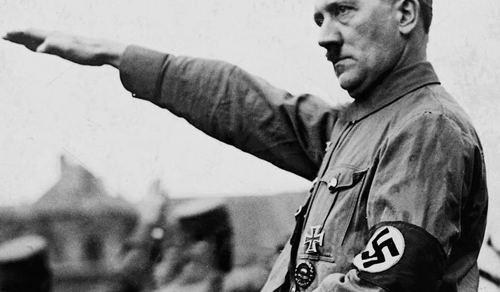 The Wound Badge (Verwundetenabzeichen) was a military decoration first promulgated by Wilhelm II, German Emperor on 3 March 1918, which was awarded to wounded or frostbitten soldiers of the Imperial German Army during World War I.

During the Battle of the Somme in October 1916 Hitler received a wound in his left thigh when a shell exploded at the entrance to the dispatch runners' dugout. He was sent for almost two months to the Red Cross hospital at Beelitz in Brandenburg, and was awarded the Wound Badge in black on 18 May 1918. On 15 October 1918, he and several comrades were temporarily blinded due to a British mustard-gas attack. After initial treatment, Hitler was hospitalized in Pasewalk in Pomerania, and was still these when he learned of Germany's defeat on 10 November. The Wound Badge is one of the 3 medals that Hitler wore constantly on his uniforms (but rarely with civil clothes). Hitler's badge being a World War I award, there was no swastika on the helmet of his version. While issued pieces were seamless with pebbled surface, privately purchased badges in most cases had a cut-out design: we can see photographic evidence of Hitler wearing both versions.

Between the world wars, a special wound badge was created to award wounded members of the German armed forces who fought on the Nationalist side of the Spanish Civil War, between 1936 and 1939. This badge is referred to as the Condor Legion Wound Badge and was exactly the same at the WWI badge with the addition of a swastika on the helmet.

During the Second World War, the badge with swastika was awarded to wounded members in the Reichswehr, the Wehrmacht, SS and the auxiliary service organizations. After March 1943, due to the increasing number of Allied bombings, it was also awarded to wounded civilians in air raids (only when the wound was the result of enemy hostile action).

After the failed assassination attempt on Hitler's life on 20 July 1944 at the Führerhauptquartier Wolfsschanze, a special wound badge was created to award those who were present in the room where the bomb exploded (twenty-four men were present, one officer was killed and three succumbed to their wounds a short time later). Hitler did not award himself with the 20 July Wound Badge and continued to wear his WWI badge until the end. 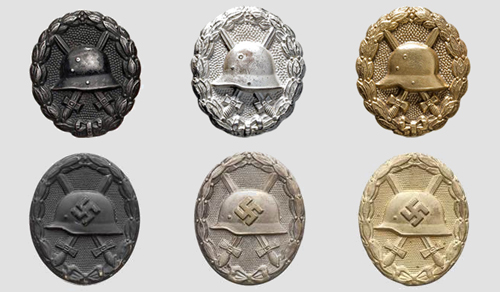 All versions of the badges had three ranks:

Black (3rd class, representing Iron), for those wounded once or twice by hostile action (including air raids).

Silver (2nd class) for being wounded three or four times.

Gold (1st class, which could be awarded posthumously) for five or more times wounded. 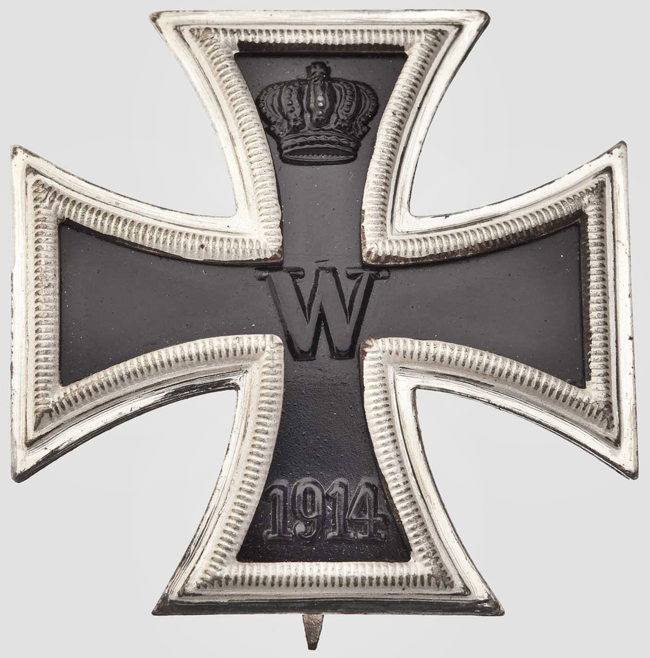 The Iron Cross (Eisernes Kreuz) is a military decoration of the Kingdom of Prussia, and later of Germany, which was established by King Frederick William III of Prussia and first awarded on 10 March 1813 in Breslau. In addition to the Napoleonic Wars, the Iron Cross was awarded during the Franco-Prussian War, the First World War, and the Second World War. The Iron Cross has not been awarded since May 1945 and is awarded only in wartime.

It is normally a military decoration only — though there were instances of it being awarded to civilians for performing military functions. As an example, the civilian pilot Hanna Reitsch was awarded the Iron Cross First Class by Adolf Hitler for her bravery as a test pilot and was one of only two women awarded the Iron Cross First Class during World War II. The Iron Cross originally was the symbol of the Teutonic Knights (a heraldic cross pattée), and the cross design (but not the specific decoration) has been the symbol of Germany's armed forces since around 1870. 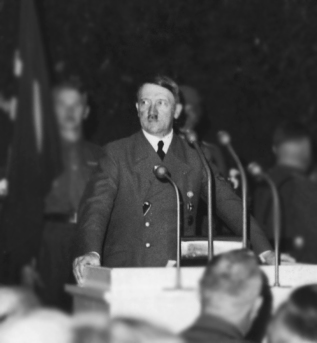 During World War I, Adolf Hitler was awarded the Iron Cross Second Class on 12 February 1915, and the Iron Cross First Class on 4 August 1918 while he served in the Bavarian Reserve Infantry Regiment 16 of the Royal Bavarian Army as a Gefreiter (a grade between a first class soldier and a corporal, this is the second military grade after Gemeine, the Unteroffizier being the actual corporal grade).

The Iron Cross First Class, along with the Wound Badge in black, were the 2 decorations that Hitler wore the most during his life (on each uniform until his death).

In May 1945, American soldiers retrieved a set of Iron Cross and Wound Badge from Hitler's Munich appartment in Prinzregentenplatz 16, and it was found out that he wore lighter versions of these decorations. It seems he asked to have a version specially made with a lighter metal in order to wear them more easily on his clothes and uniforms.

He also never wore the Iron Cross Second Class ribbon on a button of his tunic, but he wore the Blutorden ribbon on his field jacket during wartime, on the occasion of the Putsch commemoration of 8 November (for example during his speech at the Bürgerbraukeller, then at the Löwenbräukeller after the failed bombing attempt of 1939). This photo shows Hitler wearing the Blutorden ribbon. 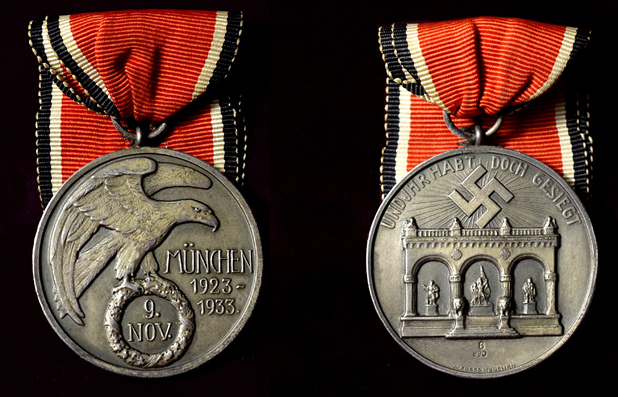 The Blutorden (Blood Order) was the most prestigious decoration of the NSDAP. Created in March 1934, it was rewarded to all participants of the Beer Hall Putsch of 9 November 1923 (less than 6000 recipients), and was later extended to other recipients.

Hitler wore his Blutorden (the only one, with Göring's medal, that was not numbered) with his brown shirt uniform during the annual pustch commemorations of 8 and 9 November between 1935 and 1938 (strangely, it seems he did not wear it in 1934, the year of the creation of the badge).

Tinnies are small badges, often made of cheap metal, like tin (hence their name), which were widely produced for almost each event that took place during the Third Reich, and were sold to the public as a souvenir for their participation of the event. There are thousands of tinnies, and they are now a major part of Third Reich collectibles. 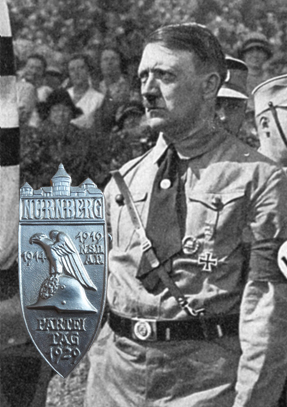 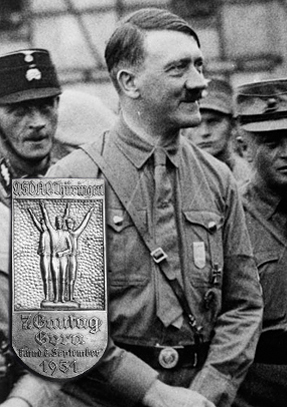 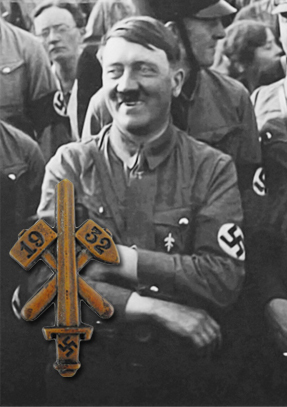 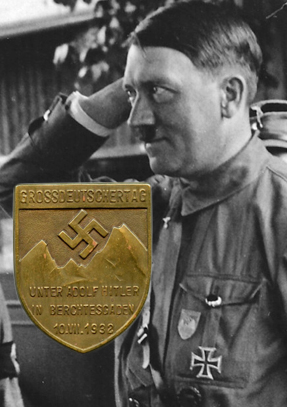 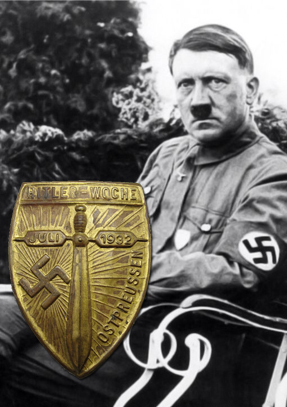 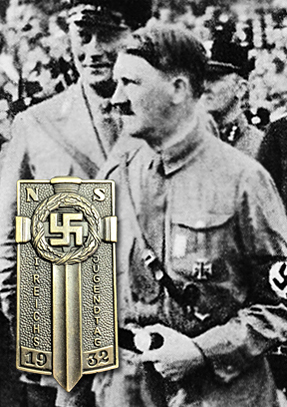 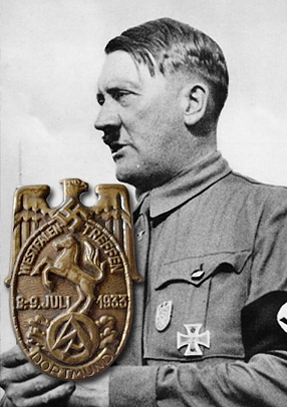 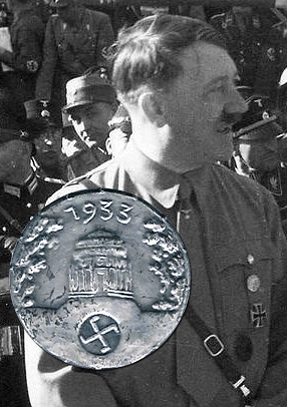 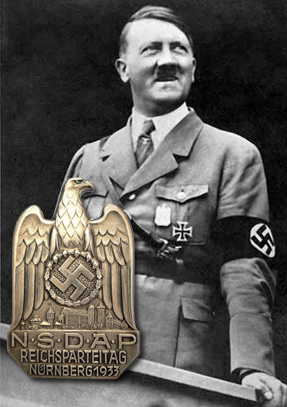 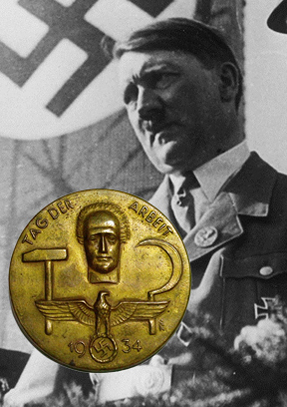 Adolf Hitler was awarded many decorations from his military service, his membership in the NSDAP and SS, and his positions as national leader and commander in chief of the army.

According to the 1940 "Organizationsbuch der NSDAP" (the official reference book written by Robert Ley), the NSDAP decorations are the following (in order of importance): 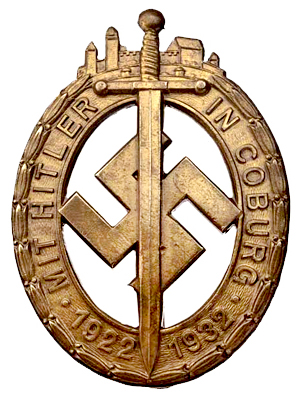 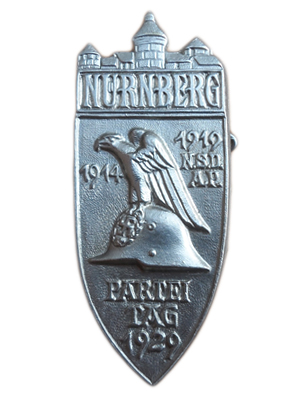 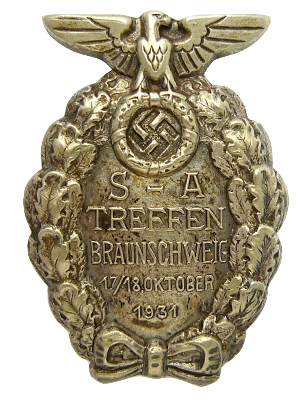 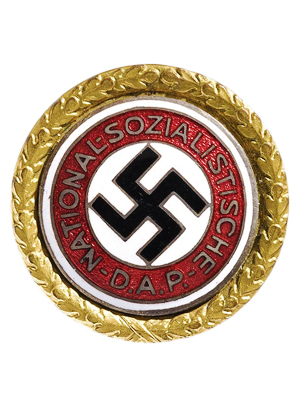 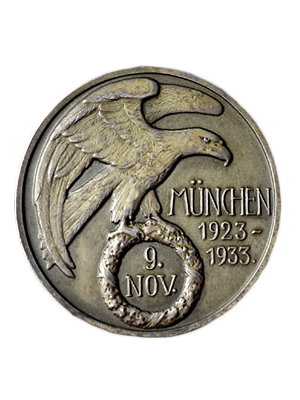 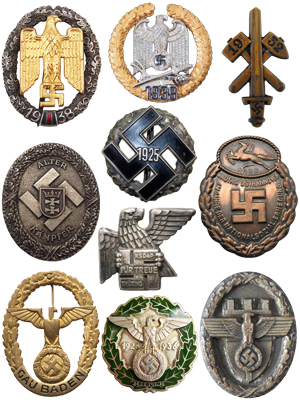 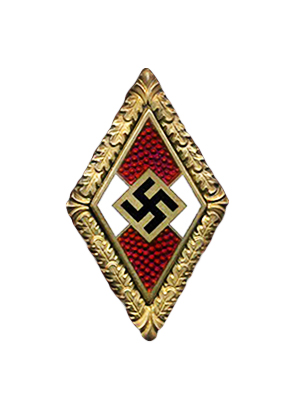 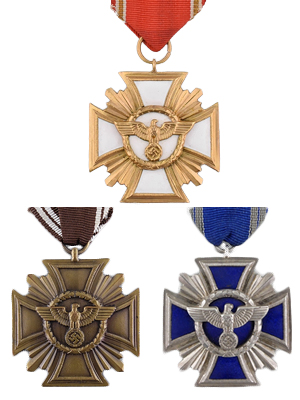